Back to Latest Articles
C# Tutorial

Intro – Why is programming so important? There are so many people that get discouraged from programming, because it may seem too difficult. It’s actually way simpler than it...

Histogram Equalization And Magic Behind It

C# tutorial on how to achieve histogram equalization on an image.

In this tutorial we will be talking about intensity level slicing in image processing. What is Intensity Level Slicing It’s a process that highlights pixels in an arbitrary...

This post is a short revision of Contrast Stretch post we already worked on in the past. Where we talked about histogram equalization, which is a little more complex method than...

C# Tutorial: How To Use Log Transformation on Images

C# Tutorial: How To Flip an Image Horizontally

Where Do We Start? There are numerous ways you can flip an image horizontally. It’s pretty basic functionality in image processing. I wanted to challenge myself and not just...

C# Tutorial: How To Scale Images Without Deforming Them

Let’s Get Started A very basic problem that we face in image processing is how to scale images without making them look deformed when we want to make it of an arbitrary...

Zero padding an image is useful when we’re convolving it with a filter of certain size. How much padding should we use depends on how big our filter is. What is the purpose...

C# Tutorial: How To Use Gamma Correction

Intro – Why is programming so important?

There are so many people that get discouraged from programming, because it may seem too difficult. It’s actually way simpler than it may seem in the beginning.

Programming is something more and more people adopt and use to optimize the efficiency of their work and even find answers, that wouldn’t be possible to find any other way.

So it can prove itself useful in expressing your imagination, like lego blocks. It’s free and the number of different options is rising everyday.

Microsoft developed C# programming language. It originates mainly from other programming languages like C++, Visual Basic and Java. We write the code on .NET Framework, which provides many tools to create all kinds of software. We also have the option to add and build on it.

Microsoft’.NET framework is basically a platform that can be run on numerous different devices, such as your desktop computer, smartphone and pretty much everything else that has a processor. 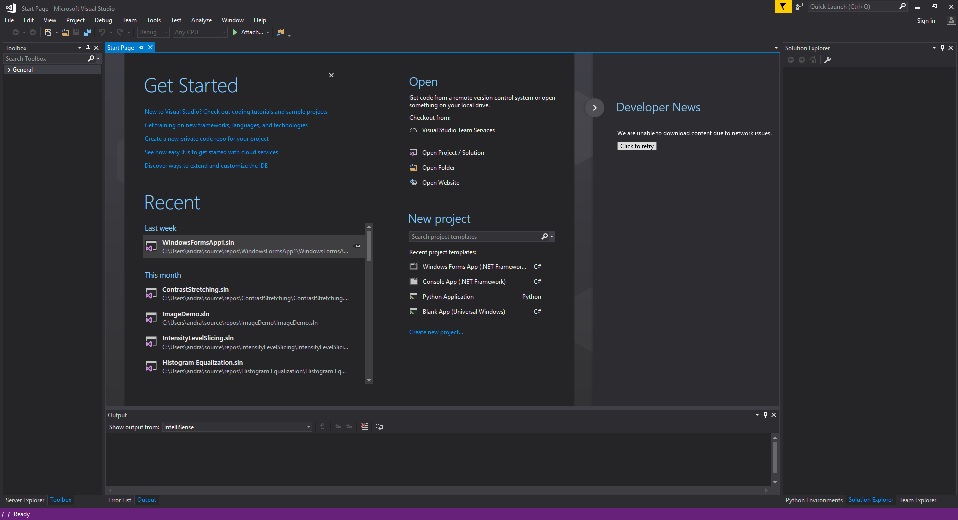 Besides all that, it supports other programming languages such as C++ and Visual Basic.

Each Solution is not comprised of one file, but with a bunch of them. All these together are called a Project.

There are also different kinds of Projects we can create:

By selecting different types of projects, you can create different implementations of your code.

Functions We’ve been writing simple programs so far. But when things get more complicated, writing it all into one block of code could become hard to read. We can use functions...

C# Tutorial: How To Use Log Transformation on Images